In a major breakthrough, Australia has approved a COVID-19 vaccine. Here’s when the jabs will begin, and who is first in line.

Australians will receive their first COVID-19 vaccines in late February 2021 after the Pfizer jab was approved for use, but the Prime Minister has warned it will not mean an immediate return to normal.

The Pfizer COVID-19 vaccine has been granted provisional approval by the Therapeutic Goods Administration (TGA) a year after the first COVID-19 case was confirmed in Australia.

The government had aimed to administer the first of its 10 million Pfizer doses in mid-February, but it has been pushed back slightly due to production and delivery problems. Vaccinations in parts of Europe have been delayed after Pfizer halved the number of doses delivered to some EU countries.

Australia’s rollout could be pushed back to early March if there were further delays, but Prime Minister Scott Morrison said Australians should take confidence from Australia’s meticulous approval process.

“Australia has taken the time, we have been watching and learning from the experience overseas. We remain within the guard rails of the time frame that we set a few weeks ago but that will continue to come under challenge for events and circumstances that exist well beyond our shores,” he told reporters on Monday.

Those in the priority group – including elderly Australians, aged-care workers, and health workers – will be the first to receive the jab. The vaccine has been approved for all ages over 16.

The Pfizer vaccine had a 95% efficacy, and was considered the world’s most effective protection against COVID-19. It will be administered in two doses, 21 days apart minimum.

But Mr Morrison warned “there are limits to vaccines”, playing down expectations the development would spark an immediate return to normal.

“It is important to understand that once the vaccine starts, it doesn’t mean you can jump on a plane to Bali the next day. It doesn’t mean that the masks disappear … or the quarantine arrangements for return into Australia will end.”

“This will build. It will start small scale, it will build up and it will happen over a period of time, as we have outlined over the course of this year,” Morrison said.

Labor leader Anthony Albanese said all Australians should have faith in the TGA approval, but lashed the wait for the vaccine rollout. “Vaccines don’t save lives, vaccinations do. That’s why it’s important that this Pfizer vaccine is rolled out as soon as possible,” he told reporters on Monday.

“In the US, Canada, the EU and the UK, doses were administered within one week of approval. How long will Australian have to wait after the TGA has given the big tick?”

When will I get my Covid-19 jab in Australia? Click on below image to view larger. 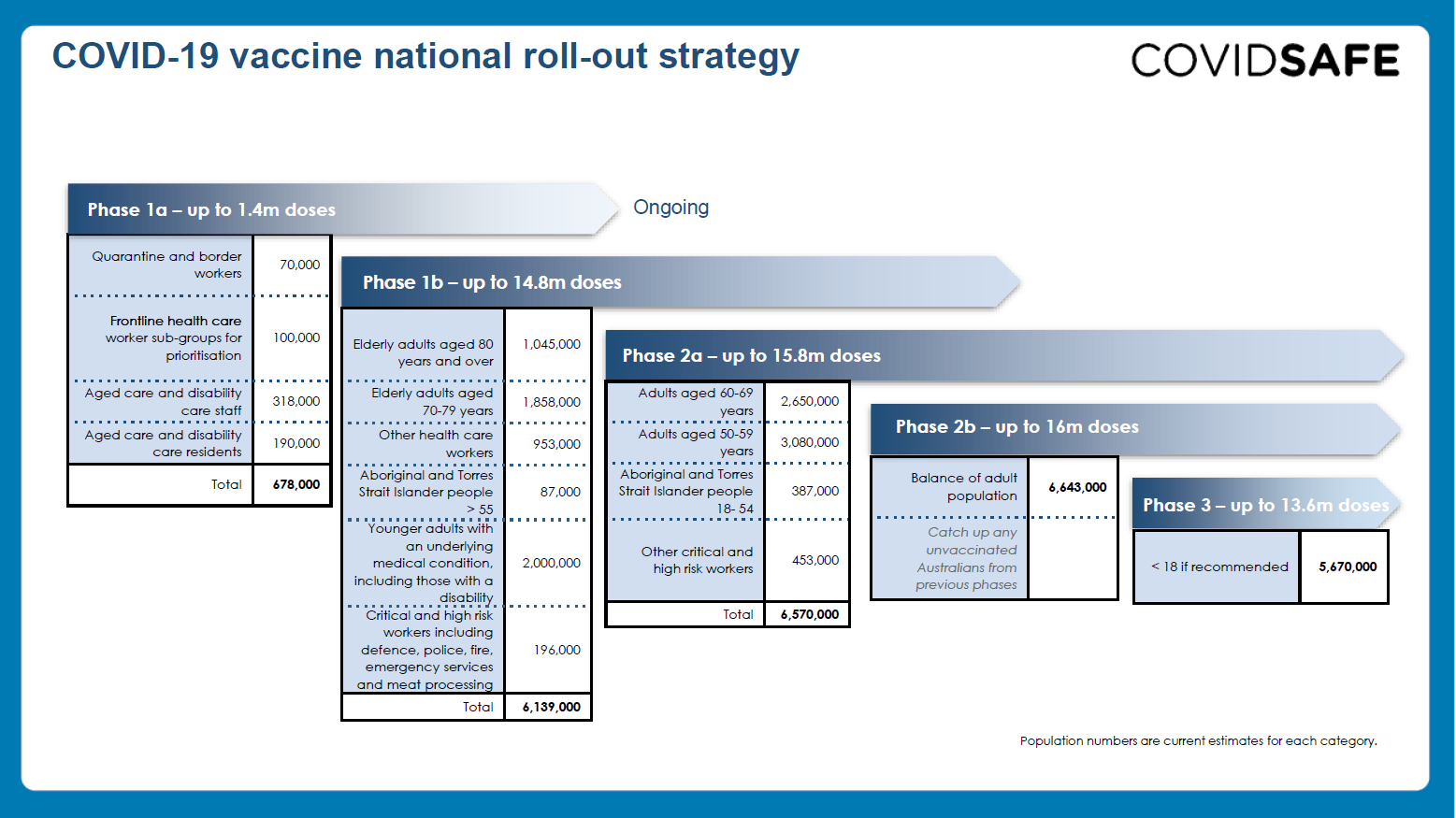 Health Minister Greg Hunt said the TGA had been working around the clock to safely expedite approval. An average of 80,000 doses per week would be administered once rollout began.

“Today’s another very important step forward in protecting Australians, in saving lives and protecting lives. Through the pandemic, vaccination rates have actually gone up. If you had asked me at the outset, I would have thought would have been almost impossible,” he said.

“A critical part of our COVID-19 strategy is a focus on safety and the delivery of vaccines. That is why I am delighted that the TGA … has approved the use of the Pfizer vaccine in Australia.”

“Because of the global risk, we have to proceed with a safe, secure vaccine program, but Australians can have confidence if the best regulator in the world approves the vaccine, it is safe and effective.”

Mr Hunt also revealed the rollout of the AstraZeneca vaccine would likely begin in March, slightly earlier than first thought, subject to TGA approval. But the company revealed it would ship fewer doses to Europe than expected, citing reduced yields from one of its manufacturers.

Doctors in Australia will bulk bill COVID-19 vaccinations, making it free for members of the community

The Medicare Benefits Schedule has been finalised for GPs to administer the AstraZeneca vaccine, and it’s good news for Aussies.

COVID-19 vaccines will be bulk billed by GPs, the federal government has confirmed.

While the Pfizer jab, which requires specific cold temperature storage, will be limited to hospitals and specialised areas, the AstraZeneca vaccine will be administered in GP clinics.

Following the government’s consistent assurance the Covid-19 vaccine will be universal and at no cost to members of the community, it has been confirmed doctors will bulk bill the jab, with hopes up to 1000 clinics will register to administer the doses. Expressions of interest for GP practices opened on Saturday.

GPs will be responsible for administering up to 53 million doses of the AstraZeneca vaccine, which the Federal Government confirmed purchase of in December 2020.

Under the Medicare Benefits Schedule finalised on Friday, doctors will be paid $30.76 for the first consult and $24.25 for the second, given both the Pfizer and AstraZeneca jab require two shots within 21 days.